Why we don’t Night Ride after rain In early winter, just after sufficient rains have fallen for the ground to be moist and for temporary pools to begin to form, these salamanders begin their nocturnal breeding migration. On rainy nights, the adults emerge from their underground burrows and roam, often more than a mile, to lay their eggs in these newly replenished vernal pools. Males typically outnumber females and often precede females to the ponds.

A threatened species, estimated to have disappeared from more than 50 percent of its historic range. Many populations have been extirpated due to loss of or fragmenting of suitable habitat through urbanization and agriculture. Hybridization with non-native Tiger Salamanders also threatens the continuity of this species. CTS are listed, under the Federal Endangered Species Act as “threatened.” The California Fish and Game Commission in February of 2009 designated the California tiger salamander as a “candidate” for threatened or endangered status. California Tiger Salamanders are considerably large for today’s amphibians. The male can reach 8.5 inches long and the females 7 inches. Males differ from females in their overall size as well as their enlarged cloacae during breeding season. The adults are stocky with round heads, protruding black eyes and long tails that curl around their body. They are slick, glistening black with yellowish spots and stripes on their back, sides and tail. These markings slightly resemble those of a tiger and earn the species their name. This yellowish color also outlines their wide mouth, which gives the appearance of broad painted smile. Like other salamanders, its body is low to the ground and its four legs protrude sideways from its body as though it were ready to run.

Join MORCA a chapter of IMBA

Donate to MORCA when you shop at Amazon

Amazon donates 0.5% of the price of your eligible purchases to MORCA when you shop on AmazonSmile. AmazonSmile is the same Amazon you know. Same products, same prices, same service.
Learn More. 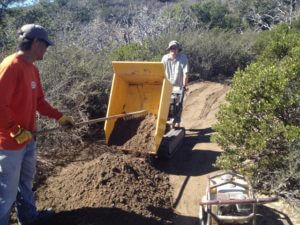